On the eve of ACI EUROPE’s Annual Congress, association paints bleakest picture yet of state of play for aviation.

ACI EUROPE has today released the latest European passenger traffic data, showing collapsed air traffic and air connectivity and massive disruption to airport rankings across the footprint.
CONTINUED PASSENGER LOSS DUE TO QUARANTINE-BASED TRAVEL RESTRICTIONS
Overall figures, reflecting data up to and including November, show passenger traffic currently down by 81% across the European airport networks, with the stark lost passenger threshold of 1.5 billion so far this year passed just yesterday (on 15 November). These passengers, in a 1.5 metre spaced line, would wrap around Earth 56 times.
Airports in the EU, EEA, Switzerland and the UK are currently seeing passenger traffic decreasing by an average of 86% compared to last year.
Olivier Jankovec, Director General of ACI EUROPE, said: “These airports are bracing with an accelerating downward trend in passenger traffic. Airlines continue to cut back planned capacity in response to the further extension of local lockdowns in many countries – which are only adding further pain to the one already inflicted by severe cross border travel restrictions. As things stand, passenger traffic is heading back towards another full collapse similar to the one experienced in second quarter, when volumes were down by 96%.”
Passenger traffic in the rest of Europe remains somehow more resilient, currently decreasing by 59%, a rate that appears to be fairly stable at the moment. Airports in Russia and Turkey are clearly outperforming other markets, due to the relative dynamism of their domestic market.
DISRUPTION HIGHLIGHTED IN AIRPORT RANKING REVERSAL
This situation has turned the top 10 European airport league upside down. In September, the busiest European airport was Antalya with just 2.25 million passengers (-53.5%), followed by Moscow-Sheremetyevo (-53.5%), Moscow-Domodedovo (-26.2%) and Istanbul (-71%).
London-Heathrow, which normally holds the top position only ranked 10th, behind Paris-CDG (8th) and Amsterdam-Schiphol (9th) – with these major hubs also being surpassed by Istanbul-Sabiha Gokcen (5th), Moscow-Vnukovo (6th) and Saint Petersburg (7th). Other major hubs like Frankfurt and Munich did not even make it to the top 10 league. 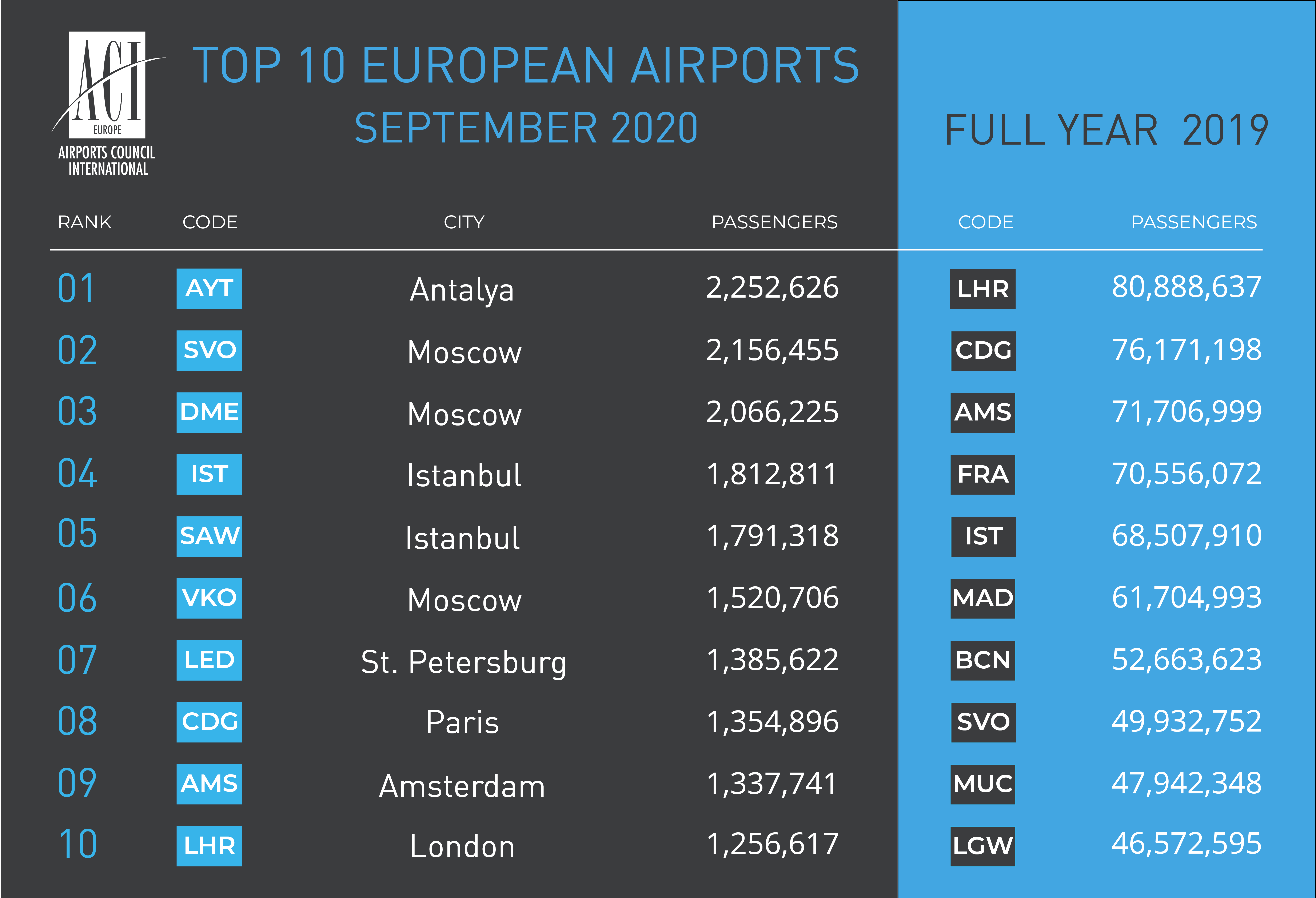 FULL INDUSTRY IMPACT TO BE SET OUT BY JANKOVEC AT ANNUAL CONGRESS TOMORROW
The full impact of COVID on the airport industry, and the resulting radical reset of the airport business model, will be set out by Jankovec as he opens the ACI EUROPE Annual Congress tomorrow, 17 November.
Download