European airports and tourism organisations have made an urgent appeal for changes to the EU’s COVID-19 State aid framework, arguing that without it these collapsing industries will suffer irreversible damage in a constantly deteriorating situation.

The distress call came by way of a letter sent last night by ACI EUROPE and the European Travel Commission to European Executive Vice-President and Commissioner for Competition Mrs Margrethe Vestager - on the very same day the European Commission acknowledged that “travel will continue to pose a particular challenge” in the fight against the COVID-19 pandemic. The Commission also echoed the recent ECDC advice against non-essential travel “until the epidemiological situation has considerably improved, particularly in the light of the outbreak of new variants”.
The letter points to the tightening of travel restrictions by European States as preventing any recovery in passenger traffic and reveals yet steeper falls in air connectivity across Europe, as another 700 air routes have disappeared from European airports since the end of November. This brings the total figure of lost air routes to nearing the 7000 mark. 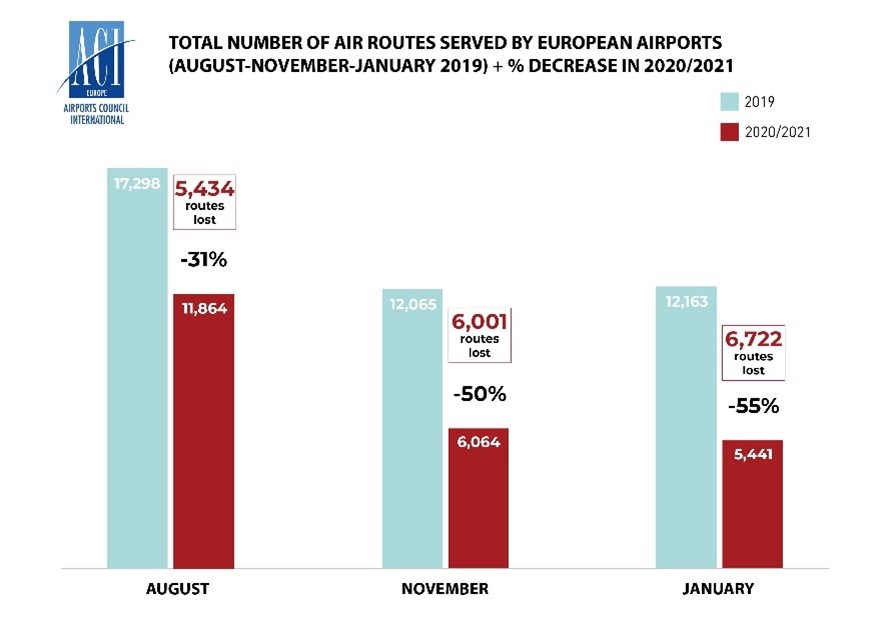 The associations also warn of further downward forecasts in air passenger traffic volumes for the months ahead. ACI EUROPE has revised its 2021 passenger traffic forecast to -56% for the year at Europe’s airports in the baseline scenario (down from -43% in the previous forecast). This coincides with EUROCONTROL’s revised forecast of a full recovery not foreseen until 2026. ACI EUROPE’s forecasts in detail can be found here.
Against such a dramatic outlook, ACI EUROPE and ETC are urging Commissioner Vestager to come up with more flexible and more effective State aid rules enabling States to provide the financial assistance needed by airports and to support to air connectivity.
Olivier Jankovec, Director General of ACI EUROPE commented: “The Commission’s current COVID-19 State aid framework is no longer fit for purpose when it comes to airports. It involves limitations and conditionalities that are very hard to comprehend and that are simply unacceptable given the situation we are now facing – not to mention the fact that airlines have already been granted almost 15 times more financial aid than airports so far”.
Eduardo Santander, Executive Director of ETC said: “What we are asking for is only the support which is proportionate to the severity of the crisis and the outlook we now face. This is about making sure the aviation infrastructure does not suffer irreversible damage, which would in turn create an instant ripple effect through the tourism ecosystem and the local communities dependent upon them. We need urgent action – every day counts”.
Three core asks are set out to the European Commission, namely:
Download