26 June 2019
Limassol - This morning at the 29th ACI EUROPE Annual Congress & General Assembly* in Cyprus, the airport trade body unveiled a Resolution¹ formally committing the European airport industry to become net zero for carbon emissions under its control by 2050, at the latest.
With this commitment, Europe’s airports are responding to the Climate Emergency – and acting upon the latest scientific evidence presented by the IPCC Special Report on Global Warming of 1.5°C.
This commitment comes alongside a call for the entire aviation sector to develop a joint ambition & initial roadmap towards a net zero carbon emissions air transport system. This is needed to supplement the significant efforts already being made by the aviation sector under ICAO’s Basket of Measures, including CORSIA.
AIRPORTS FIRMLY COMMITTED TO ACTION
Today’s pledge is further backed up so far by 194 airports run by 40 airport operators across 24 European countries - with each of them individually committing to the same objective. This marks a step change in the climate action of the airport industry. Based on Europe’s airports current traffic volumes (2.34 billion passengers welcomed in 2018) and estimated carbon footprint, this net zero commitment will eliminate a total of 3.46 million tons of annual CO2 emissions as of 2050.
Dr Michael Kerkloh, President of ACI EUROPE and CEO of Munich Airport commented “Europe’s airports have been leading climate action with annual reductions announced every year for the past decade². 43 of them have actually become carbon neutral, supported by the global industry standard Airport Carbon Accreditation. However, today’s commitment brings a new dimension to this – no offsets. Crucially, with its NetZero2050 commitment, the airport industry is aligning itself with the Paris Agreement and the ambitions of the vast majority of EU countries.”
He added “Europe’s airports have already started delivering, and I am confident that many will reach net zero before 2050. There are already 3 net zero airports in Europe: Luleå, Ronneby and Visby - operated by the Swedish airport operator, Swedavia. Swedavia aims to achieve net zero emissions for all its airports including Stockholm-Arlanda by 2020 along with Hamburg airport by 2022 - while Amsterdam-Schiphol, Eindhoven and Copenhagen airports have set this goal for 2030.”
Patricia Espinosa, Executive Secretary, UN Climate Change said “The IPCC Special Report from last October is unequivocal about the need to achieve net zero emissions by mid-century. We need all sectors of society working towards this ultimate goal. It is therefore encouraging to see the airport industry voluntarily raising its ambitions and we look forward to working with this vital sector.”
BUILDING ON A RECORD OF ACTION
In 2017, the European airport industry committed to have 100 carbon neutral airports by 2030. Today’s commitment builds on this, but raises the stakes as airport operators will not have the possibility to purchase offset Europe’s airport industry commits to net zero CO2 emissions by 2050 credits to reach net zero status. ACI EUROPE sees offsetting as a temporary measure to address residual emissions that airports will need to gradually replace by in-sector reductions as new decarbonisation technologies and opportunities arise.
Today’s NetZero2050 commitment occurs as part of ACI EUROPE launching a comprehensive Sustainability Strategy for Airports³. The strategy addresses a wide range of environmental but also social and economic issues. In this way, it equips European airports with an industry-wide framework and guidance, enabling them to embed sustainability at the core of their business strategy.
The 194 airports undersigning today’s industry commitment welcomed 62.5% of European air passenger traffic through their doors last year.
The full list of the undersigning airports is in the Resolution (link below).
The Resolution remains open to additional signatories. 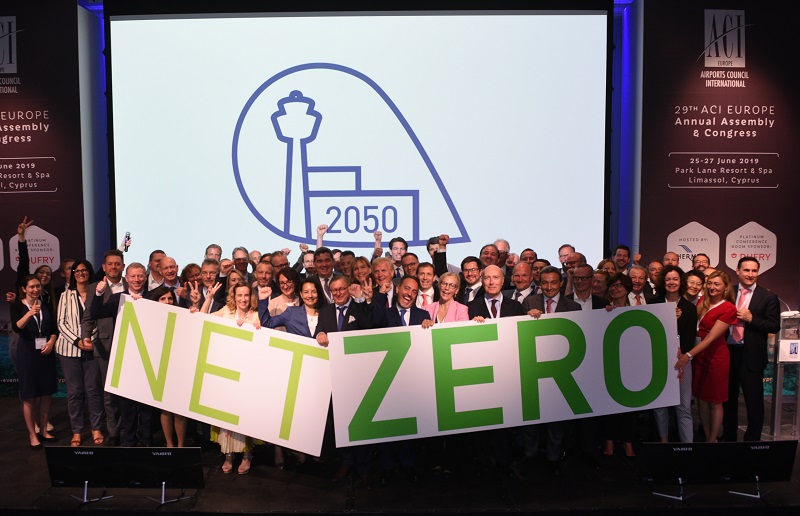